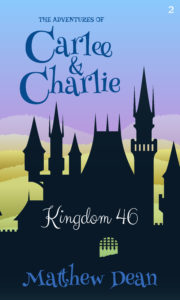 When King Herbert Shrub hears of the incident in Furrybottom, he is convinced by his advisors to declare a full-scale war against dragons.

Unfortunately, there’s just one dragon in the kingdom: a perfectly friendly dragon named Charlie, whose only companion is a little girl named Carlee. When Charlie is captured, Carlee sets out to rescue him from the clutches of the kingdom and the politics of war.

The second novelette of The Adventures of Carlee and Charlie, a slightly satirical series for grown-up children and child-like adults.

“There is no better book about dragon terrorism in the modern world. All the kings horses and all the kings men should decree that ‘Carlee and Charlie’ goes to the bestseller list again.”
– The Kingdom Kourier

“If you were confused about the dragon-terror-alert-system color code, look no further. Now you no longer have to fear dragons randomly. The King and his advisers will tell you exactly when to be afraid. And that provides peace of mind.”
– Furrybottom Flyer